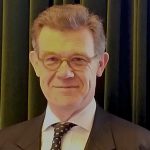 In November 2015 he was appointed a judge of the Court of Appeal, where he is the Supervising Lord Justice for Planning.